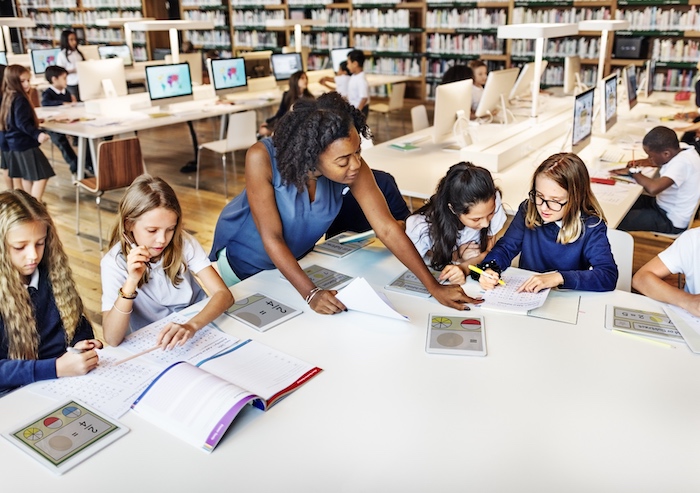 One of the significant challenges facing educators is meeting the needs of an increasingly diverse student population. This increased diversity is evident in reports from the National Center for Education Statistics which indicate that the race and ethnicity of students shifted between 2000 and 2015 from 61 to 49 percent white, 17 to 15 percent black, and 16 to 26 percent hispanic, while teachers were reported as 80 percent white, 7 percent black, and 9 percent hispanic.

To promote change and equality in education, it’s important to take the backgrounds, needs, and challenges of all children into consideration. Well-designed programs—created and administered by leaders in education—are key to this change.

Race and ethnicity aren’t the only diversity factors to consider when planning how to promote change and equity in education. There are numerous youth communities that may be disadvantaged by educational programs that don’t recognize the importance of diversity. Educators and administrators need to recognize and support these students, to make sure no one is overlooked. Elements of student diversity can include:

Some schools have made attempts to create programs that serve the full range of their students. Others have been slow to respond to changing demographics and tried to fit today’s students into outmoded and narrow educational models. The educational system has a great need for more professionals with the qualifications and the passion to design programs for change and equality in education.

The changing needs of a changing country

To understand how to promote change and equality in education, it’s important to understand the different educational outcomes experienced by different groups. A more finely grained look at census data begins to reveal where educational challenges lie.

Among people, 25 years and older, people who spoke Spanish at home were about as likely to be high school graduates as the general population, but much more likely to fall short of a high school diploma (34.6 percent versus 8.2 percent on average). Those who spoke Spanish at home were less than half as likely to be college graduates: 15.7 percent as opposed to 32.9 percent of the population as a whole.

The same disparities exist among all young people who speak a language other than English. The high school dropout rate is 26.1 percent and these students are somewhat less likely to have graduated high school or taken some college courses. However, their college graduation rates (28.5 percent) are almost as high as the population as a whole.

Household income levels make a difference in educational outcomes as well. A 2016 report from the College Board shows that students from the bottom income quintiles complete some level of postsecondary education at much lower rates than those in the top. Although rates of higher education among poorer students increased dramatically between 1990 and 2015, the gap remains.

These educational disparities translate to disparate outcomes. Bureau of Labor Statistics (BLS) data show that people with a high school diploma are almost twice as likely to be unemployed (4.6 percent) as those with a college degree (2.5 percent). The BLS reports an almost 40 percent difference between the average weekly earnings of these groups.

BLS projections show even worse outcomes for those students who never finish high school. They have the highest unemployment rate of any group at 6.5 percent. For those who do work, the projected average weekly salary is less than half of the average salary for someone with a bachelor’s degree.

Change and equity in education can’t solve every problem in society. The College Board found that women earned less than men with the same level of education and African American and Latino graduates earned less than their white peers. But putting students on an equal footing, especially early in their educational careers, is a crucial step in fostering a more equitable and inclusive America.

Where we find strategies to promote educational change and equality

The Organisation for Economic Co-Operation and Development (OECD)—whose mission is to promote policies that will improve the economic and social well-being of people around the world—developed a policy brief with 10 steps to promote equity in education. The steps are grouped in three categories: design, practices, and resourcing.

To design programs for change and equity in education, the OECD recommends that schools refrain from tracking students at a young age. The brief suggests that educational tracking, if used at all, should come late in a child’s secondary education. Programs that allow people to return and complete their education, such as getting a GED, are also a pathway to greater equity.

School choice programs can—the OECD brief noted—be a barrier to equity in educational outcomes. Because parents with higher incomes are likely to be able to make better choices and advocate for their children to attend the best schools, families with fewer resources can find their children pushed into less desirable schools, unless the program includes mechanisms to ensure equity. Otherwise, the students who have the greatest needs can end up sorted into schools with the lowest levels of funding and support.

The OECD is just one of many organizations that dedicates their time to promoting change and equality among children and providing tangible strategies to achieve that goal. With this knowledge, educational leaders are empowered and equipped with the tools needed to affect real change and improve the quality of education for all students across the country.

An ethnically diverse faculty can improve outcomes for students of color

Under otherwise equal circumstances, black students have greater academic achievement when they are taught by black teachers. A collaborative study that looked into the impact of same-race teachers on North Carolina students revealed that black students who are exposed to one black teacher between the third and fifth grades were 13 percent more likely to enroll in college. Those who had two black teachers were 32 percent more likely to enroll in college. These findings further support the “role model effect” theory wherein students attain higher levels of education just by experiencing someone they relate to in a professional setting.

How do we get it right?

Practices that increase change and equality in education include robust assistance programs for students who struggle to keep up with their grade level. Districts also need to create a bridge between home and school to improve outcomes for the most challenged students. While wealthier families can often provide resources in the home that help children succeed, poorer families where parental time is stretched thin may not be able to prioritize home learning. Programs that allow all parents to become allies and champions of their children are key to change and equality in education.

A large and sudden influx of migrants in the EU has increased the urgency to determine how to promote change and equity in education among European governments. For the United States, however, the challenge of creating educational programs that help immigrant children succeed is ongoing because the US has the largest foreign-born population of any country in the world.

Census data shows that approximately 14 percent of the US population are immigrants. Pew Research Center predicts that the foreign-born US population will grow to more than 78 million by 2065, an eight-fold growth in just a century. These data highlight the imperative for education leaders to design culturally sensitive programs for immigrant students. To achieve true equality and equity, these youth need the opportunity to succeed in their new home while honoring their origins.

Detailed and accurate program evaluations show educational leaders areas where schools need improvements. While it’s important to pay close attention to these reports and make the necessary changes, school districts are often strapped for cash and forced to make hard choices about which programs to fund. School districts must prioritize funding emphasize the importance equality for all students so everyone is at least getting a high school diploma while receiving the most comprehensive education possible.

A new generation of leaders in American education is designing programs that promote change and equity in education. These programs aren’t just about fairness and equality of opportunity: they change students’ lives.

GLSEN, which supports LGBTQ elementary and secondary students, did a school climate survey in 2017. Their research found that almost 60 percent of LGBTQ students reported missing school because they didn’t feel safe. LGBTQ youth who were harassed at school had lower GPAs than those who weren’t.

But the survey also contained good news about the power of forward-thinking leaders to effect change and equity in education. Although fewer than 20 percent of LGBTQ students were able to study LGBTQ history in a positive light (and almost as many reported negative class instruction about LGBTQ communities), these inclusive programs fostered good outcomes. At schools with LGBTQ curriculum, fewer students reported harassment and name-calling because of their sexual orientation or gender identity. These students were more likely to show up for school and had higher GPAs. Educational programs that showed LGBTQ people in a positive light led to less homophobia and transphobia among the school population. That is a positive change for all students, while it also helps one of the most vulnerable school populations feel safe to show up for their education.

Promoting change and equity in education is integral to the mission of Mills College. Founded in 1885, Mills was the first women’s college west of the Rockies. Over the years, Mills has become known as a center for innovative education, offering in-demand graduate programs for both women and men.

The online MA in Educational Leadership gives you the opportunity to gain the skills you need to become a force for change and equity in education. The program includes courses to develop the leadership skills, ethical foundation, and cultural competency you need to join the vanguard of change and equity in education. Your leadership skills will set you on a career path where you can make a positive change in the lives of youth who might otherwise have had fewer chances to succeed.

This educational leadership master’s program includes practical instruction in planning and assessment. It will prepare you to design evidence-based programs that work.

You can complete this wholly online program while remaining in your current job. If you dream of creating a school environment that gives all children an equal chance to succeed, grow, and thrive, a Master’s in Educational Leadership from Mills College is a great first step.