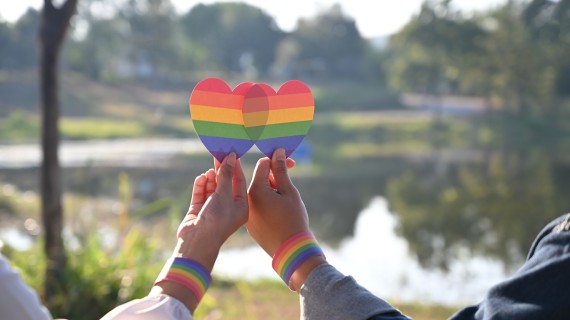 Every student has a right to learn in a safe and accepting environment. Transgender students do not forfeit their right to equal educational opportunity when they decide to live as their true selves. Policies that support transgender student rights help them reach their full learning potential.

Misconceptions About Gender and Gender Identity

Factors standing in the way of greater acceptance of transgender students include misconceptions about gender and how transgender people define their identity:

Transitioning is a key milestone for transgender students that can be stressful and calls for understanding and support. It is the process of beginning to live daily life according to one’s gender identity rather than the gender associated with the sex they were assigned at birth.

Transitioning can take many forms. It might include a new name, the adoption of new pronouns, or a change in appearance or clothing. Some transgender people undergo hormone therapy or other medical procedures to change their physical characteristics to better match their gender identity, while others take no outward steps to transition.

Transgender students in schools with official policies or guidelines that support them suffer less discrimination and enjoy a greater sense of belonging, according to GLSEN. Unfortunately, few students surveyed by GLSEN reported that their schools had official policies or guidelines designed to support transgender students. Anti-bullying and anti-harassment policies with specific protections for LGBTQ students were also rare.

Use Chosen Names and Pronouns

One of the most basic — and profoundly important — ways that teachers can support transgender students is by using their chosen names and pronouns. Doing so has two critical impacts:

A person’s name is an important part of their identity. Transgender people often choose a new name because their birth names (sometimes referred to as a dead name) don’t conform to their gender identity or represent their true selves.

Transgender people may choose to use pronouns associated with their gender identity, but others prefer gender-neutral pronouns. For example, rather than being referred to as “he” or “she,” an individual may prefer to be referred to as “they.” Others may wish to be referred to only by name. Pronouns that have been devised specifically to be gender-neutral can also replace gendered pronouns; for example, ze can be used instead of she/he/they, and hir can take the place of her/hers/him/his/they/theirs.

Schools risk violating a transgender student’s privacy rights under FERPA and the Constitution if they share information such as their legal name and the sex they were assigned at birth. Such protections also cover a student’s gender transition.

Some students transition publicly, but many choose to keep the process private, and schools should have safeguards in place to protect information about the student that could result in inadvertent exposure.

Participation in extracurricular activities is known to boost student engagement and promote better educational outcomes. One of the ways that schools can encourage extracurricular participation by transgender students is through organizations such as gay-straight alliances and gender and sexuality alliances. Such clubs provide an affirming environment and give transgender students and others in the LGBTQ community opportunities to enact positive change in their schools.

Honoring students’ gender identity extends to participation in sex-separated activities such as sports and overnight school trips, as well as school functions that involve gendered roles (prom or homecoming king and queen, for example). Schools should invite students to participate in these activities in the gender category that matches their gender identity.

Educators at all levels can contribute to more supportive environments for all learners, including transgender students. Some spearhead efforts to develop programs and practices that support marginalized groups. Others work on a more personal level, serving as crucial allies to students who face unique challenges.

Grounded in knowledge of teaching and learning, the program’s graduates are prepared to confront ethical and social challenges in educational settings and implement structural improvements. Visit Mills’ online Master of Arts in Educational Leadership program to learn more about opportunities to advance your career and create more equitable learning environments for all students.