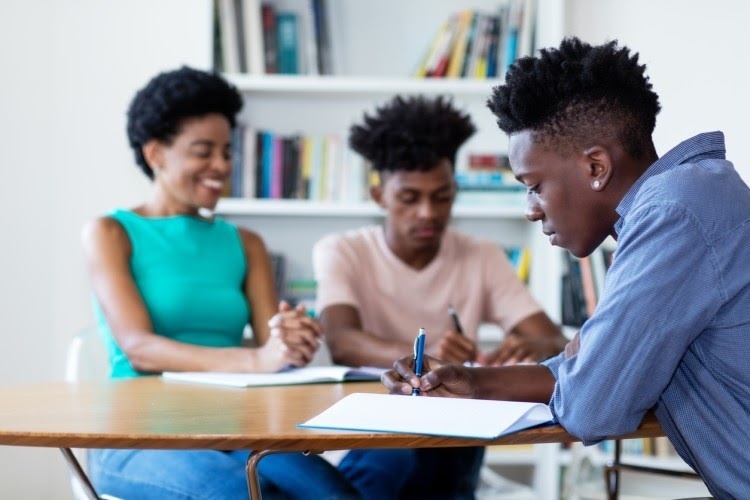 What do you think of when you hear the term “urban education”? “Urban,” from Latin, means related to city life. City schools often have large, diverse populations. Yet, terms such as urban education have become common shorthand for talking about race and class in problematic ways.

So, what is “urban education”? Why is the term so often misused? And how can using clear and inclusive language address systemic racism and classism in our education systems?

“Urban education” is an example of coded language in education. Using coded language means “substituting terms describing racial identity with seemingly race-neutral terms that disguise explicit and/or implicit racial animus,” according to the National Education Association (NEA). We can broaden this definition to include dog whistling at groups based on socioeconomic class, gender, religion, sexual orientation, and so on.

How Urban Education Became a Euphemism for Race and Class

Urban education’s connotations and associations with race and class require proper historical context. Professor Jamila Lyiscott explains that certain mainstream ideas about “urban education”—high suspension rates, violence, and low test scores—have been “signed” into our national consciousness. In media, academia, and public policy, “urban education” relates to other coded terms, such as “under-resourced,” “under-served,” and “under-achieving,” as educators at Class Trouble point out.

Lyiscott continues, “To compound this, the collective gaze of our society too readily bends toward dominant narratives of disengaged, unmotivated, failing Black and Brown youth to incite countless salvific efforts such as Race to the Top and No Child Left Behind.”

When we use terms such as “urban education” as euphemisms for Black, brown, and poor, we obscure histories of racism and classism in U.S. education systems. We aid in the active forgetting of white flight that took place after Brown v. Board of Education (1954), which resulted in a lack of funding for school districts serving students of color. We ignore ongoing racist zoning practices. We perpetuate victim-blaming mentalities, misdirecting our attention onto individuals rather than actively dismantling the systems that perpetuate inequality. In short, we fail to accurately call injustice and oppression by its name.

We cannot talk about “urban education” without discussing white saviorism and anti-Blackness.

The legacy of settler colonialism has not been undone in our schools. Natalee Kēhaulani Bauer, Assistant Adjunct Professor at Mills College, describes how “well-intentioned” white teachers, especially white women, perpetuate white supremacy by viewing themselves as benevolent rescuers of low-income students and students of color.

Rather than learning about the communities they serve, these teachers replicate existing inequalities. So long as white teachers fail to question their own authority and privileged positions in the classroom, they will continue to be complicit in the oppression and marginalization of students via structural classism and racism.

Many corporate organizations capitalize on white savior narratives that lock students in cycles of underachievement. For example, the Teach for America programs put instructors with little or no teaching experience in classrooms with students who need unique support. Arguably, such programs do more harm than good, causing high turnover of teachers in high-poverty schools, which already suffer from low teacher retention rates. Programs that position prospective white teachers as saviors to students from “disadvantaged backgrounds” succeed most at assuaging white guilt and padding resumes of white teachers.

Conventional teacher training often fails to teach educators specific strategies for accommodating the learning needs and experiences of students who face racism and classism on a daily basis. These tools range from how to help students to form trusting relationships (personal resilience skills) to resisting in the face of systemic oppression (collective consciousness raising and activist skills). Too often, teachers read and discipline behaviors they fail to understand as “deviant” rather than rational responses to ongoing injustice. The result? Students of color and low-income students incur additional costs of racism and classism in the classroom.

The Importance of Using Clear and Inclusive Language

Saying “urban education” or “urban schools” when you mean students from low-income backgrounds or students of color perpetuates power imbalances in education. How can educators do better?

Start with speaking directly and specifically. Instead of using euphemisms to indirectly refer to a specific group (or groups) of students, name them. Using clear, inclusive language is a necessary step in addressing power imbalances within the education system.

When you are unsure whether someone else is using the term “urban education” euphemistically—as code for race or class—look for context clues and ask for clarification.

Coded language trades on both conscious and unconscious bias. Anti-racist educators must call out and unlearn racism and classism in all forms, whether subtle or explicit.

In certain contexts, “urban education” can have a literal meaning. Among educators, researchers, policymakers, and activists, however, “urban education” has no universal definition. Some uses of the term limit educational success for all students by perpetuating and reinforcing power imbalances in the education system.

In the journal Educational Researcher, Richard Welsh and Walker Swain report on their survey of hundreds of educational studies. They found that the term urban education “collapses race (people), place, and space” and note that scholars today define “urban education” according to a range of categories, including:

As this list of options suggest, there is hope for disambiguating the phrase “urban education.” Before you use the term, or allow someone else to say the term unquestioningly, ask yourself, “What does ‘urban education’ really mean here, in this context?” If the answer can be further specified, use the more specific term rather than code.

Become a Leader in Education

Promoting inclusion in schools requires a commitment to justice in education. Aspiring education leaders who hold education equity as a core value should seek programs that share their commitment.

Focusing on systemic change in education, Mills College’s online Master of Arts in Educational Leadership promotes a collaborative and an inclusive leadership model with a special emphasis on education. Explore the program to learn more about how Mills College prepares professionals for educational leadership.

The Atlantic, “The Urban-School Stigma”

The Brookings Institution, “The Importance of a Diverse Teaching Force”

Class Trouble, “A Guide to Coded Language in Education Vol. 1 & 2”

IGI Global, “Handbook of Research on Social Inequality and Education”

Medium, “While We’re Talking About Racist Structures of Oppression, We Ought to Talk About Teach For America”

Rethinking Schools, “What Do You Mean When You Say Urban? Speaking Honestly About Race and Students”

The Urban Review, “The Quest to Be Love(d) in Urban Schools: Issue Introduction”